Nebraska Farm Life WWI to WWII is a book written by Richard C. McCall based on a true story of a family growing up on a Nebraska farm. In Chapter 10 “Veterinary Medicine on the Farm” there are several mentions of Con Wilson related to his veterinary work.

“This chapter concerns some of the veterinary problems that we experienced on our farm. We administered most of the veterinary care to our animals ourselves. There was a veterinary in Red Cloud named Doc Hurst, but for some reason or other we never used his services. There was a Dr. Moranville in Guide Rock, who was said to be pretty good, but most of our work was done by a self-taught man named Con Wilson.”

“Cholera was an ever-present problem with hogs…Most of the time, Con Wilson came and administered the vaccine but later during World War II when labor was scarce, we were able to get the vaccine and do it ourselves.”

“There were several instances of cases of lumpy jaw in cattle…A veterinarian would arrive, probably Con Wilson, and treat them with an intravenous injection of calcium into a neck vein.”

“Con Wilson had been called once to clean a cow that had failed to deliver the calf bed. By the time he arrived, this was a very foul smelling, messy job. Dick and Dad were observing and providing some help. Neither of them had the strongest of stomachs and both were wishing they were somewhere else. In the middle of the job, Con withdrew the arm he had had inside the cow, reached into his shirt pocket with that hand, and pulled out a plug of chewing tobacco that he offered to Dad. Dad turned slightly green and left the barn. Dick was amused enough at Dad’s discomfort that he managed to stay to the end.” 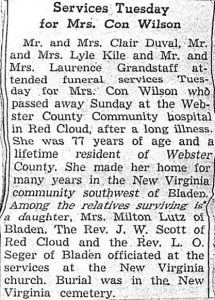 Mr. and Mrs. Clair Duval, Mr. and Mrs. Lyle Kile and Mr. and Mr.s Laurence Grandstaff attended funeral services Tuesday for Mrs. Con Wilson who passed away Sunday at the Webster County Community hospital in Red Cloud, after a long illness. She was 77 hears of age and a lifetime resident of Webster County. She made her home for many years in the New Virginia community southwest of Bladen. Among the relatives surviving is a daughter, Mrs. Milton Lutz of Bladen. The Rev. J.W. Scott of Red Cloud and the Rev. L.O. Seger of Bladen officiated at the services at the New Virginia cemetery.

These photos were taken in June of 1942, the day of Mary (Wisecarver) Wilson’s funeral.  John and Mary had eleven children in all. 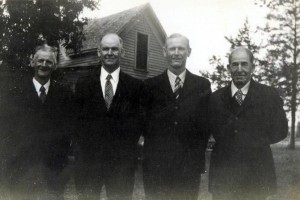 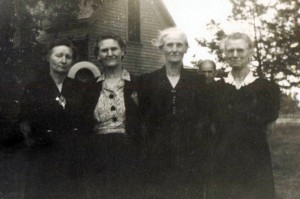 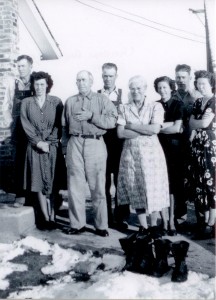 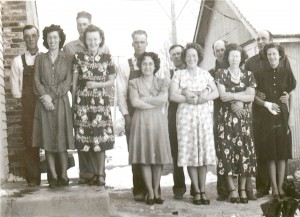