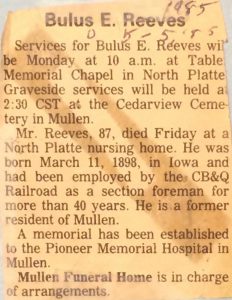 Funeral services were held on Thursday afternoon, May 16, for Vilas H. Jones, 60, who died on Monday, May 13 at the Pioneer Memorial Hospital.

Services were held form the United Methodist Church at Mullen with the Rev. Dwight Kemling officiating.

Mrs. Doris Miller and Wayne Hampton furnished the music, with the songs, “Precious Memories” and the “The Lord’s Prayer”.

Interment was in the Cedarview cemetery at Mullen with Marcy-Upton Post 109 of the American Legion furnishing the military honors.

Vilas Howard Jones, the son of Willard and Ella Jones, was born on a farm near Fairfield, Nebr., on March 21, 1914. He attended school there and graduated from Fairfield high school in 1932.

He came to Mullen in March, 1946 with the United States Geological survey. He was in partnership in a grocery store for a short while and then took up the work of an automobile mechanic, being employed for many years in the Chevrolet garage. Shortly before his final illness he began to work for the Nebraska Department of Roads.

He was married to Neva Little on August 5, 1946, and four children were born to this union.

Mr. Jones was a member of Marcy-Upton Post 109 of the American Legion at Mullen and Lewis Trobough Post 256 at Fairfield. He joined the United Methodist Church at Mullen in 1959.

He was preceded in death by his parents and a sister, Velma Briggs.

Survivors include his wife; sons Sgt. Donald of the Air Force at Colorado Springs and Ronald of Mullen; daughters Mrs. Robert (Bonnie) Bain of Curtis and Jean at home, two granddaughters; 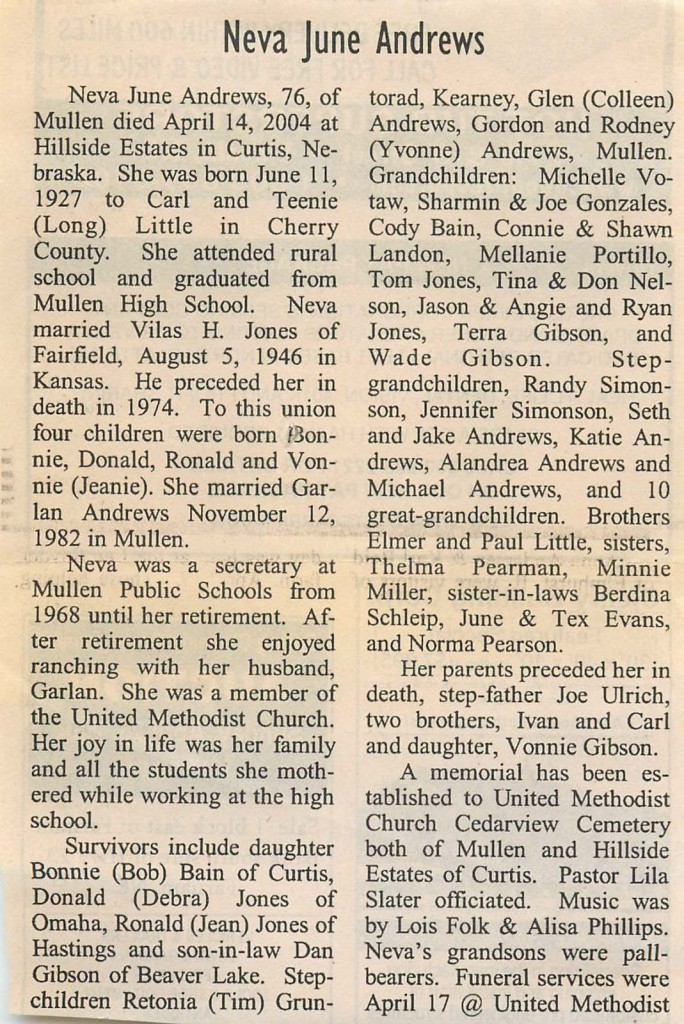