These pictures are on display at the Webster County Historical Museum in Red Cloud, NE. 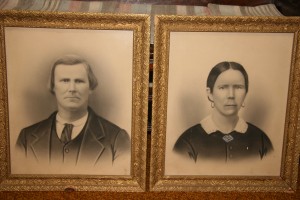 John C. Wilson was born near Winchester, Va. January 19, 1850. In 1872 he was united in marriage with Miss Mary Wisecarver. To them were born five sons and three daughters. One son died in infancy. The others are: C.M. Wilson, Roy J. Wilson Jr., Claude Wilson, Don Wilson, Mrs. Frank Bean, Mrs. Lulu Lockhart, Mrs. Oscar Johnson, and Mrs. Claude Duval. Mr. Wilson and family came to this county in April 1878, and settled on the farm northwest of here where he resided continuously until a few months ago when he went to reside with his daughter, Mrs. Duval where the final summons came on November 2nd. During the past year he had failed rapidly. He leaves besides the sons and daughters, two brothers, Arthur and Clarence Wilson of Inavale, and one sister Mrs. Mary Bayles of Winchester, Va. The wife from whom he had been separated for many years, is a resident of Red Cloud. 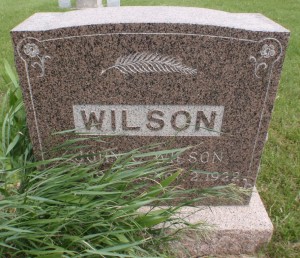