The Otto post office was established September 12, 1884, with Francis E. “Ed” Payne as postmaster. It too was named for Otto Skjelver. In 1890, William Brethour had the mail contract to carry mail from Inavale to Otto. The post office remained in the F.E. Payne residence in the NW 1/4 of section 34 until December 11, 1894, with Ed Payne’s sister Mary, (Mrs. A.A. Cooper) performing the duties of postmistress. Ada Skjelver, daughter of Otto Skjelver, pointed out that the District 66 school teachers boarded with the Coopers – in the Ed Payne house – “so it was no trouble to get the young men to ride over there for the mail in the evening once or twice a week!” Anne E. Marker was the next postmistress until July 7, 1898 with the post office in the Alford Marker residence. The post office was then moved to the Eric J. Peterson farm, with Mr. Peterson as postmaster. The Otto post office remained at the Peterson farm until January 14, 1904, when the mail was sent to Inavale post office for distribution to the residents of southern Catherton precinct.

The Farmers Creek Telephone Company was formed in 1903, with lines strung from Inavale to the Otto post office. Another line came up the middle fork of Farmers Creek to the A.A. Cooper farm. A telephone line from Campbell came to the Otto Skjelver and the E.J. Peterson farms. Thus families in the area could go through the “switches” at the Cooper, Skjelver or Peterson farms to talk to neighbors on another line without paying toll. Also in 1903, the Webster County Argus reported that the “Rural mail route was ‘running full blast’ and the farmers who live several miles from town now enjoy reading a daily paper.”

Source:
Webster County: Visions of the Past
By Mabel Cooper Skjelver
Published 1980
Pages 66-67

The Otto post office was at the E.J. Peterson farm residence from July 7, 1898 to January 14, 1904, when the post office was closed and mail ordered distributed from Inavale. This event was commemorated by the mail patrons of the area who brought a basket dinner to the Peterson residence. Some thirty families were present who had taken their mail from the Otto post office regularly, and they presented the E.J. Peterson with a library table in appreciation of their service.

Source:
Webster County: Visions of the Past
By Mabel Cooper Skjelver
Published 1980
Page 65 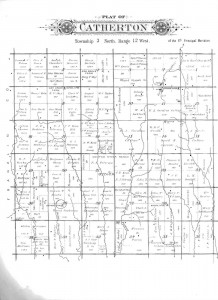