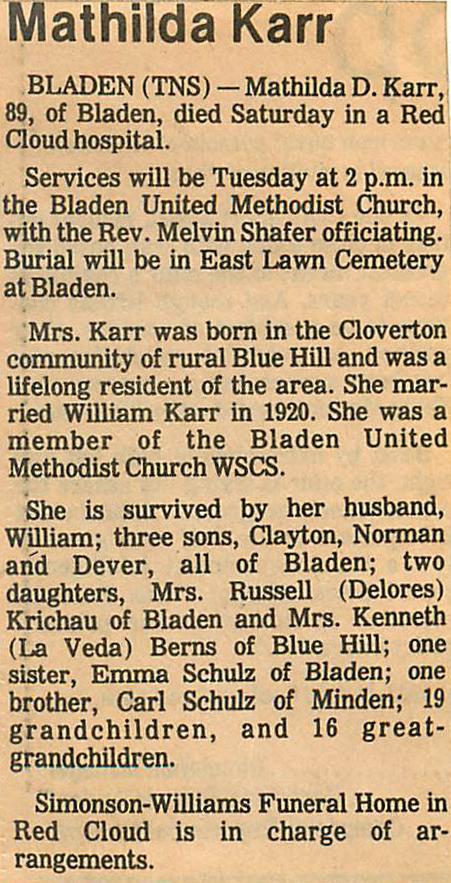 Mathilda D. Karr, daughter of Robert and Louise Schulz, was born February 2, 1893, on a farm northwest of Blue Hill and passed away at the Webster County Community Hospital in Red Cloud on February 20, 1982, at the age of 89 years and 18 days.

She was baptized and confirmed in the St. Paul Lutheran Church in blue Hill and later transferred her membership to the United Methodist Church at Bladen.

On February 25, 1920, she was united in marriage to William Karr.  They were blessed with five children.  In 1980, she and her husband celebrated their 60th Wedding Anniversary.  She spent her entire life in the Blue Hill and Bladen communities.  She was preceded in death by her parents, four brothers, one sister and on grand daughter.

On January 10th she suffered a stroke from which she never recovered.  She leaves to mourn her passing her husband, William; three sons, Clayton, Norman and Dever, all of Bladen and LaVeda Berns, of Blue Hill.  Three daughters-in-law, Betty, Regina and Arlene; two sons-in-law, Russell Krichau and Kenneth Berns.  There are nineteen grandchildren and sixteen great grandchildren.  A sister, Emma Schulz, of Bladen; a brother, Carl Schulz, of Minden, Nebraska; two sisters-in-law, Hester Schulz of Blue Hill and Ferne Schulz, of Minden and other relatives and friends.

She was a loving wife, mother and grandmother and will be greatly missed by all who knew and loved her.

Funeral services were held at 2:00 p.m., Tuesday, February 23, 1982, from the United Methodist Church in Bladen with the Reverend Melvin Shafer officiating.  Wylma Fletcher sang, “In The Garden” and “Take My Hand Precious Lord”, accompanied by Mrs. Marjorie Lockhart, organist.  The pallbearers were Darrell Karr, Garold Karr, Jim Karr, Kevin Karr, Karl Berns and Rob Wilson.  Interment was in the East Lawn Cemetery with the Simonson-Williams Funeral Home of Red Cloud in charge of the arrangements.

This is the gravestone of William P. and Mathilda D. Karr in East Lawn Cemetery, Bladen, NE. 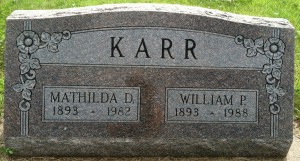 This is the Certificate of Marriage for William P. Karr and Tillie Schulz, dated February 25, 1920. 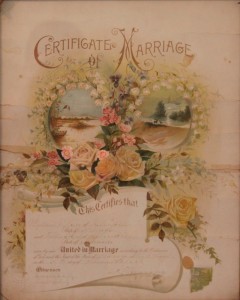 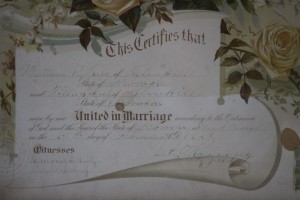