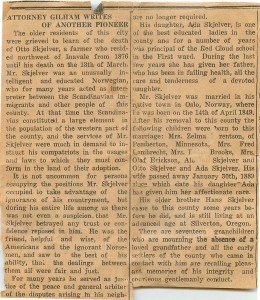 The older residents of this city were grieved to learn of the death of Otto Skjelver, a farmer who resided northwest of Inavale from 1876 until his death on the 13th of March.  Mr. Skjelver was an unusually intelligent and educated Norwegian, who for many years acted as interpreter between the Scandinavian immigrants and other people of this county.  At that time the Scandinavians constituted a large element in the population of the western part of the county, and the services of Mr. Skjelver were much in demand to instruct his compatriots in the usages and laws to which they must conform in the land of their adoption.

It is not uncommon for persons occupying the positions Mr. Skjelver occupied to take advantage of the ignorance of his countryment, but during his entire life among us there was not even a suspicion that Mr. Skjelver betrayed any trust or confidence reposed in him.  He was the friend, helpful and wise, of the Americans and the ignorant Norsemen, and saw to the best of his ability that the dealings between them all were fair and just.

For many years he served as justice of the peace and general arbiter of the disputes arising in his neigh (article missing) are no longer required.

His daughter, Ada Skjelver, is one of the best educated ladies in the county and for a number of years was principal of the Red Cloud school in the First ward.  During the last few years she has given her father, who has been in failing health, all the care and tenderness of a devoted daughter.

Mr. Skjelver was married in his native town in Oslo, Norway, where he was born on the 14th of April 1849.  After his removal to this county the following children were born to this marriage:  Mrs. Zelma Brentson, of Pemberton, Minnesota, Mrs. Fred Lambrecht, Mrs. Brooks, Mrs. Olaf Erickson, Albert Skjelver and Otto Skjelver and Ada Skjelver.  His wife passed away January 30th, 1889 since which date his daughter Ada has given him her affectionate care.

His older brother Hans Skjelver came to this county some years before he did, and is still living at an advanced age at Silverton, Oregon.

There are seventeen grandchildren who are mourning the absence of a loved grandfather and all the early settlers of the county who came in contact with him are recalling pleasant memories of his integrity and courteous gentlemanly conduct.