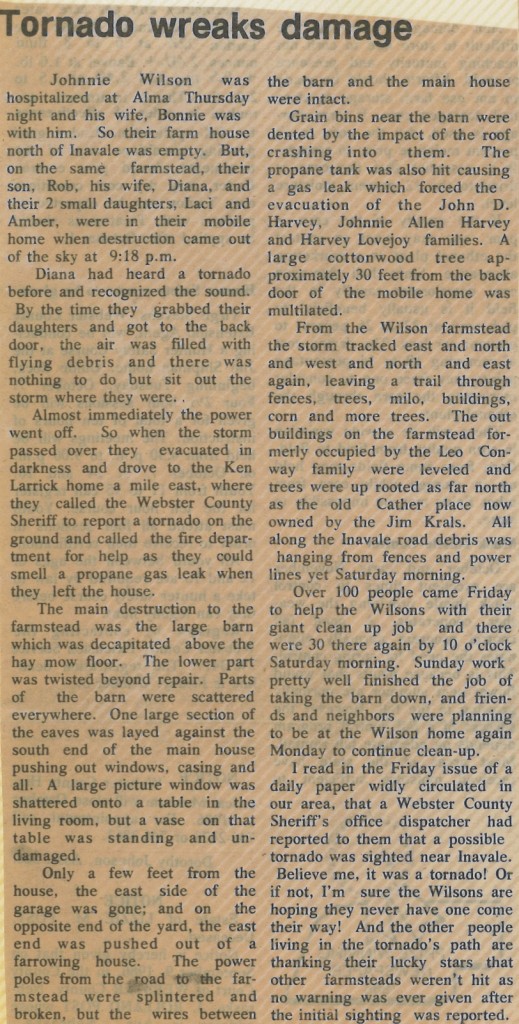 Johnnie Wilson was hospitalized at Alma Thursday night and his wife, Bonnie was with him. So their farm house north of Inavale was empty. But, on the same farmstead, their son, Rob, his wife, Diana, and their 2 small daughters, Laci and Amber, were in their mobile home when destruction came out of the sky at 9:18 p.m.

Diana has heard a tornado before and recognized the sound. By the time they grabbed their daughters and got to the back door, the air was filled with flying debris and there was nothing to do but sit out the storm where they were.

Almost immediately the power went off. So when the storm passed over they evacuated in darkness and drove to the Ken Larrick home a mile east, where they called the Webster County Sheriff to report a tornado on the ground and called the fire department for help as they could smell a propane gas leak when the left the house.

The main destruction to the farmstead was the large barn which was decapitated above the hay mow floor. The lower part was twisted beyond repair. Parts of the barn were scattered everywhere. One large section of the eaves was layed against the south end of the main house pushing out windows, casing and all. A large picture window was shattered onto a table in the living room, but a vase on that table was standing and undamaged.

Only a few feet from the house, the east side of the garage was gone; and on the opposite end of the yard, the east end was pushed out of a farrowing house. The power poles from the road to the farmstead were splintered and broken, but the wires between the barn and the main house were intact.

Grain bins near the barn were dented by the impact of the roof crashing into them. The propane tank was also hit causing a gas leak which forced the evacuation of the John D. Harvey, Johnnie Allen Harvey and Harvey Lovejoy families. A large cottonwood tree approximately 30 feet from the back door of the mobile home was mutilated.

From the Wilson farmstead the storm tracked east and north and west and north and east again, leaving a trail through fences, trees, milo, buildings, corn and more trees. The outbuildings on the farmstead formerly occupied by the Leo Conway family were leveled and trees were up rooted as far north as the old Cather place now owned by the Jim Krals. All along the Inavale road debris was hanging from fences and power lines yet Saturday morning.

Over 100 people came Friday to help the Wilsons with their giant clean up job and there were 30 there again by 10 o’clock Saturday morning. Sunday work pretty well finished the job of taking the barn down, and friends and neighbors were planning to be at the Wilson home again Monday to continue clean-up.

I read in the Friday issue of a daily paper widly circulated in our area, that a Webster County Sheriff’s office dispatcher had reported to them that a possible tornado was sighted near Inavale. Believe me, it was a tornado! Or if not, I’m sure the Wilsons are hoping they never have one come their way! And the other people living in the tornado’s path are thanking their lucky stars that other farmsteads weren’t hit as no warning was ever given after the initial sighting was reported.