Mother Nature unleashed her terrible fury Thursday evening in the form of tornados in several communities across South Central Nebraska. A very quickly developed funnel hit the Johnnie and Bonnie and Rob and Diana Wilson farmstead, 6 1/2 miles north of Inavale at 9:15. Johnnie and Bonnie were not at home at the time but Rob and Diana and daughters, Laci and Amber, were at home in their mobile home which was the far east structure on the farm site. Rob said their first indication that something was serious was brewing with the weather was when their mobile home began to shake. Their family immediately headed for his parent’s house and storm cellar, but the electricity went off by the time they reached their back door and the vibration of their home was so violent they opted for what safety a closet in a frame addition to their mobile home could provide.

When the house quit shaking and he ventured outside, Rob found that their huge barn had been destroyed with a large section of roof slamming into a grain bin and landing on a propane tank, breaking the line from the tank. Not knowing how serious the leak was, they went to a neighbors to call the Red Cloud fire department and report the tornado and several downed power lines that they had crossed to the authorities.

Daylight the next morning revealed the extent of the damage. Nearly every structure on the farm sustained damage of some kind, with the barn taking the brunt of the force, the big hip-roof being completely gone, torn up and strewn about the yard, with a large section nudged up against Johnnie and Bonnie’s house and a piece of tin protruding through a porch window and their picture window and door windows blown out. Straw from the barn loft and glass was strewn throughout the house, yet a centerpiece on their dining room table, which was setting right in front of the picture window, remained in place. The north side of the barn was completely blown out, as was about half of the east side, leaving the hay mow floor leaning precariously to the east. Many of the remaining studdings were cracked or shattered from the terrific, twisting force.

The “Wilson Barn” had served as a landmark in the New Virginia community north of Inavale for many years. A huge structure, the “Red Barn with White Trim” was easily recognized by anyone traveling the Inavale road and was used many, many times as a base of directions to other farmsteads in the area. Built in 1918 by Johnnie’s father, C.M. Wilson, the barn measured 64 ft. long, 72 ft. wide, and 48 ft. to the peak of the hipped roof. At a cost of nearly $6,000.00 in 1918, to build a structure of that type today the cost would be astronomical. The big barn survived another tornado that struck the Wilson farm in 1950, destroying a large hog shed just to the west of it and several other buildings, pushing the barn slightly out of plumb to the east, where it had remained stable and solid until Thursday evening. 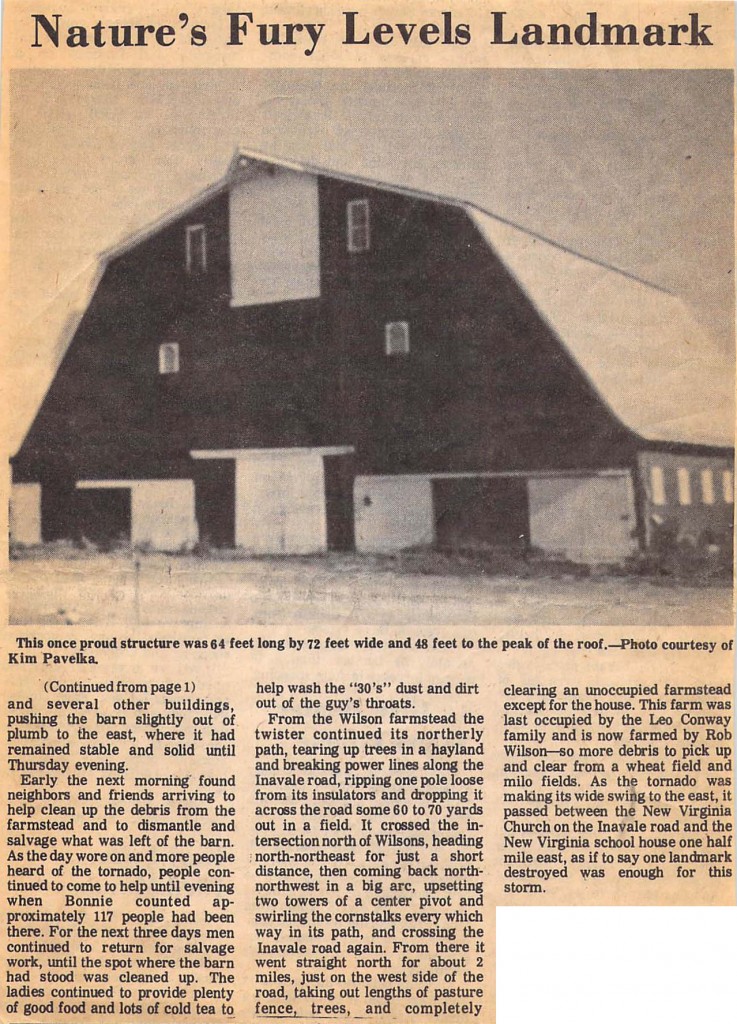 Early the next morning found neighbors and friends arriving to help clean up the debris from the farmstead and to dismantle and salvage what was left of the barn. As the day wore on and more people heard of the tornado, people continued to come to help until evening when Bonnie counted approximately 117 people had been there. For the next three days men continued to return for salvage work, until the spot where the barn had stood was cleaned up. The ladies continued to provide plenty of good food and lots of cold tea to help wash the “30’s” dust and dirt of the guy’s throats.

From the Wilson farmstead the twister continued its northerly path, tearing up trees in a hayland and breaking power lines along the Inavale road, ripping one pole loose from its insulators and dropping it across the road some 60 to 70 years out in a field. It crossed the intersection north of Wilsons, heading north-northeast for just a short distance, then coming back north-northwest in a big arc, upsetting two towers of a center pivot and swirling the cornstalks every which way in its path, and crossing the Inavale road again. From there it went straight north for about 2 miles, just on the west side of the road, taking out lengths of pasture fence, trees, and completely clearing an unoccupied farmstead except for the house. This farm was last occupied by the Leo Conway family and is now farmed by Rob Wilson – so more debris to pick up and clear from a wheat field and milo fields. As the tornado was makings its wide swing to the east, it passed between the New Virginia Church on the Inavale road and the New Virginia school house on half mile east, as if to say one landmark destroyed was enough for this storm.

This photo shows the terrible force exerted by a tornado as the full dimension 2″ x 10″ rafters were reduced to shattered kindling. This large piece of roof slammed into the grain bin at left causing considerable damage to it and then fell onto the propane tank, breaking a pipe and causing much concern over the leaking gas until a member of the Red Cloud Fire Department was able to shut off the valve.

What used to be the north side of the barn.

Neighbors and friends showed up early Friday morning to assist in the clean-up. Friday evening Bonnie Wilson was able to count 117 names of people who had come to help.

The lower half of the west hip roof was carried across the yard and part of it slammed into the south wall of Johnnie and Bonnie Wilson’s house at the extreme right of photo.