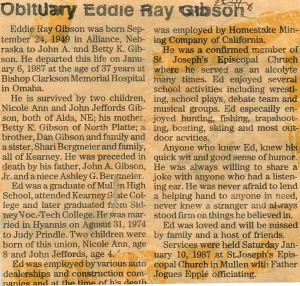 Eddie Ray Gibson was born September 24, 1949 in Alliance, Nebraska to John A. and Betty K. Gibson.  He departed this life on January 6, 1987 at the age of 37 years at Bishop Clarkson Memorial Hospital in Omaha.  He is survived by two children, Nicole Ann and John Jeffords Gibson, both of Alda, NE; his mother, Betty K. Gibson of North Platte; a brother, Dan Gibson and family and a sister, Shari Bergmeier and family, all of Kearney.  He was preceded in death by his father, John A. Gibson, Jr. and a niece Ashley G. Bergmeier.

Ed was a graduate of Mullen High School, attended Kearney State College and later graduated from Sidney Voc.-Tech College.  He was married in Hyannis on August 31, 1974 to Judy Prindle.  Two children were born of this union, Nicole Ann, age 8 and John Jeffords, age 4.  Ed was employed by various auto dealerships and construction companies and at the time of his death was employed by Homestake Mining Company of California.  He was a confirmed member of St. Joseph’s Episcopal Church where he served as an alcolyte many times.  Ed enjoyed several school activities including wrestling, school plays, debate team and musical groups.  Ed especially enjoyed hunting, fishing, trapshooting, boating, skiing and most outdoor activities.

Anyone who knew Ed, knew his quick wit and good sense of humor.  He was always willing to share a joke with anyone who had a listening ear.  He was never afraid to lend a helping hand to anyone in need, never knew a stranger and always stood firm on things he believed in.  Ed was loved and will be missed by family and a host of friends.