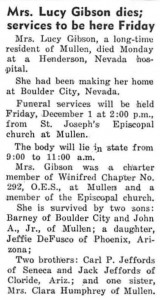 Mrs. Lucy Gibson, a long-time resident of Mullen, died Monday at a Henderson, Nevada hospital.  She had been making her home at Boulder City, Nevada.  Funeral services will be held Friday, December 1 at 2:00 p.m., from St. Joseph’s Episcopal church at Mullen.  The body will lie in state from 9:00 to 11:00 a.m.

Mrs. Gibson was a charter member of Winifred Chapter No. 292, O.E.S., at Mullen and a member of the Episcopal church.  She is survived by two sons:  Barney of Boulder City and John A. Jr., of Mullen; a daughter, Jeffie DeFusco of Phoenix, Arizona; Two brothers:  Carl P. Jeffords of Seneca and Jack Jeffords of Cloride, Ariz.; and one sister, Mrs. Clara Humphrey of Mullen.