Here’s Trixie keeping an eye on Lee.  She does really well with him! 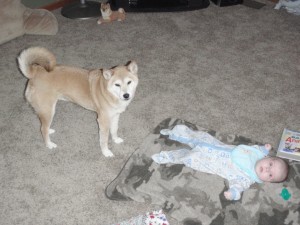 Yesterday was Lee’s two-month checkup.  He weighed in at 10 lbs. 13.5 oz. and 23 1/2″ long.  His weight was in the 45th percentile and his length was in the 75th percentile.  He got three shots but only cried a little bit.  We were afraid that it might be a long night, but lo and behold, last night was the first time he slept through the night!  Let’s hope he continues that!

Monday was my first day back to work and Lee’s first day at day care.  Fortunately our day care is only four houses to the south of ours, and Wade & I both went to college with her so we feel pretty lucky.  It was tough to leave him but week one is done, so hopefully the weeks will get easier from now on. 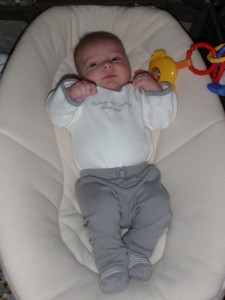 Rob bought this bull at the 2010 Cattlemen’s Classic in Kearney.  This bull was champion of the hereford division, so he couldn’t pick it up until Saturday night after the supreme row judging.  This bull came out of central Illinois and was champion at the Illinois State Fair as well. 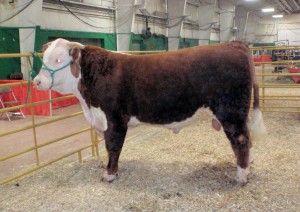 Today Suzanne and Kylee came over for a play date.  It was good to see Suzanne and fun for the babies to meet each other.  Lee is only 3 days older than Kylee. 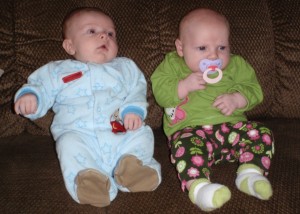