Today we all went down to the Wilson farm and saw Great-Grandma Bonnie.  I helped Rob feed the cows and we were still able to squeeze in a few games of pool.  Lee was decked out in his camo and Aunt Laci snapped this cute pic. 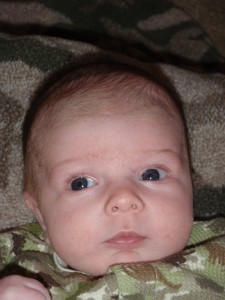 Tonight was the Buffalo Bowmen annual supper at the Alley Rose.  Terra came over and babysat for us while we went out.  It was our first time out together since Lee was born.  It was a nice break and Aunt Terra did a great job watching Lee!

Rob, Diana, Laci, Makayla and Morgan all came up and visited today.  Laci took some great pictures!  Oh, and Grandpa was proud to get Lee his first Case IH tractor! 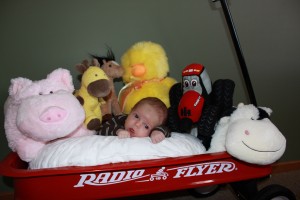 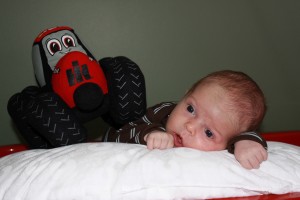 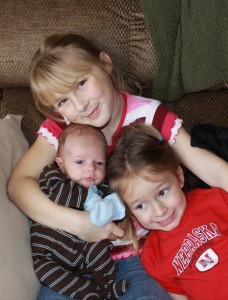 Today was my first day back at the office.  Fortunately I didn’t have too much pile up while I was gone.  That was the most time I’ve ever been absent from work (almost 3 weeks including Christmas break!)  It’ll be nice to be back on somewhat of a schedule, but I sure missed my little buddy!

Today we had Christmas festivities with the Krichau side of the family.  We played A LOT of pool on Rob’s new pool table; I think it’s fair to say that it’s officially been broken in.  Amber’s Uncle Keith fed Trixie a bunch of lil’ smokies, so we were worried she might have an upset stomach for the ride home, but she fared well (and now has a new friend).

The day before Laci took a few (….okay, about 250) pictures of Lee.  There were some great pics and Laci was nice enough to create this Birth Announcement for us. 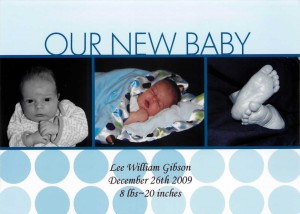