The farm/ranch has been in the family for 117 years. Rob’s great-grandfather, John Payne, homesteaded this land in 1876. Robs’ grandfather, Con Wilson, started this home headquarters in 1916. In 1922 he bought the first registered Hereford cattle. They came from around Cambridge, Nebr. from Mousel’s. He started with four bred heifers and a bull. Later he bought some more from Manger’s north of Bladen and from a ranch in Kansas. Con was a veterinary for many years. He still had a practice when he was 92 years old.

Johnny Wilson started operating the ranch after WWII and sold Hereford seed stock for years. He is still very active in the day to day work.

Robert Wilson came back to the ranch in 1973 after working at the meat animal research center for two years.

The fifth generation great-great-granddaughters, Laci and Amber Wilson, are exhibitors at the county fair showing Hereford steers and heifers.

We thank you for stopping and invite you to visit any time.

Robert and Johnny Wilson and family 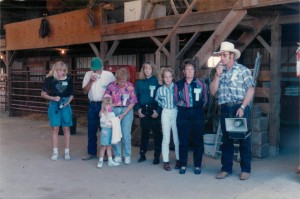