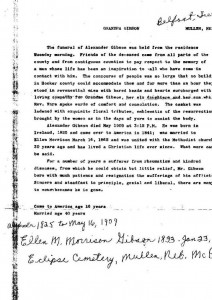 The funeral of Alexander Gibson was held from the residence Tuesday morning.  Friends of the deceased came from all parts of the county and from contiguous counties to pay respect to the memory of a man whose life has been an inspiration to all who have come in contact with him.  The concourse of people was so large that no building in Hooker county could accommodate them and for more than an hour they stood in revenential mien with bared heads and hearts surcharged with loving sympathy for Grandma Gibson, her six daughters and her son which Rev. Ware spoke words of comfort and consolation.  The casket was ladened with exquisite floral tributes, emblematic of the resurrection brought by the women as in the days of yore to anoint the body.

For a number of years a sufferer from rheumatism and kindred diseases, from which he could obtain but little relief, Mr. Gibson bore with much patience and resignation the sufferings of his affliction.  Sincere and steadfast to principle, genial and liberal, there are many to mourn because he is gone.