Lee had his first Dr. appointment this morning.  They checked his Bilirubin and everything looks good.  He weighed 7 lbs. 13 oz.  Of course it had to be one of the coldest days of the year to venture out, but it looked like Lee stayed warm in his little bear suit. 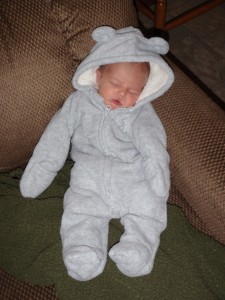 Today Lee & Amber got to come home from the hospital.  We finally got out of there about 4:00 and are happy to be home!  We have to go to the clinic in a couple days to re-check his Bilirubin, but he seems to be doing fine.  Lee weighed 7 lbs. 9 oz. when he was discharged.  We’ll have to work on getting him back up to his fighting weight!

Amber said that she had noticed some contractions earlier last evening.  Around one o’clock she woke me up to begin timing.  By 2:30 they were less than five minutes apart, so Amber called the Dr. and they said to come in to the ER.  We rounded some things up and got ready to head out, but I had to scoop a big drift of snow in front of the garage before we could leave.  It was cold and blowing snow everywhere, but we were able to make it in safely.

Six hours later baby Lee arrived!  We were both surprised it was a boy, but we’re thrilled he’s here!  We came up with his name as a combination of our middle names (Amber Lee & Wade William).  Amber’s side of the family has had the name Lee quite often, and William has been a longtime family name on the Gibson side. 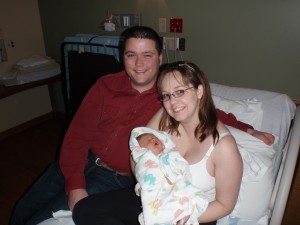